An anthology of first-person stories about the Vietnam War written by, and for, the men who lived it

For the reader who has not experienced combat, this book is not a movie script. It is not about the blue haze of gun smoke in the air, the smell of cordite, the vegetation being shredded bare by ordinance, or the blood and gore of an exit wound. This book was not written by someone whose only experience with combat is reading what someone else has written or told them.

These are some of the stories from the men who served in the 1st Cavalry Division’s LRRP/Ranger’s unit during the Vietnam War. These men are not professional writers. What they wrote was not reviewed by a professional writer. These stories are the 30-40-50-year-old memories of what they did when they were 19-20-year-old “Lurps” and chopper pilots. These stories are true events as the remember them.

Each man in the unit volunteered for the job. They knew they could un-volunteer at any time without repercussions. No one wanted someone on his team who did not want to be there. You put your life in another man’s hands, just as he put his life in yours. Everyone accepted that obligation when he volunteered for the LRRP/Rangers.

There are still a lot of stories that have not been written.  A lot of the men have the memories, but the memories are too vivid to write on paper.

Ask ten ex Recondo men why they volunteered for the unit and you will get seven or eight different answers. Many other army personnel considered us mentally imbalanced in some way. The Lurps were often referred to as “the crazies”. But every Lurp will tell you that they felt safer in the jungle with a five-or-six-man team than with a 125-man infantry company. The casualty data documents this as fact.

The LRRP/Rangers primary mission was to see but not be seen. There were five or six men on a team. Mission were usually planned for five to seven days, or until there was contact with the enemy. The teams were often several miles from the nearest friendly military. Their life lines were the radio and the chopper.

A Ranger Rule: see what you see, hear what you hear, smell what you smell, but think before you act. The 100-115-man recon company was the eyes, ears, –and nose–for the other 14,000-15,000 people in the 1st Cavalry Division in Vietnam. It has been written that the LRRP/Rangers and the 1st Battalion, 9th Regiment (a helicopter battalion) combined, accounted for about two-thirds of the casualties the 1st Cavalry Division inflicted on the enemy in this war.

This manuscript would not be complete without a big THANK YOU to the chopper crews. They put us in and got us out, often putting themselves at great danger. Those flying boxes of thin aluminum and plastic were easy targets for the enemy weapons. Simply stated, if the Lurps called, they came, and the Lurps stayed alive for another day. 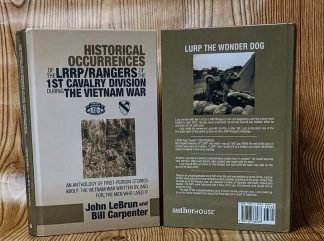